A website dedicated to the blissful pursuit of the backcountry experience, wherever mountains rise,

The San Juan Mountains are a high and rugged mountain range in the Rocky Mountains in southwestern Colorado. The area is highly mineralized and figured in the gold and silver mining industry of early Colorado. Major towns, all old mining camps, include Creede, Lake City, Silverton, Ouray, and Telluride. Large scale mining has ended in the region, although independent prospectors still work claims throughout the range. The last large scale mines were the Sunnyside Mine near Silverton, which operated until late in the 20th century and the Idarado Mine on Red Mountain Pass that closed down in the 1970s. Famous old San Juan mines include the Camp Bird and Smuggler Union mines, both located between Telluride and Ouray.

Tourism is now a major part of the regional economy, with the narrow gauge railway between Durango and Silverton being an attraction in the summer. Jeeping is popular on the old trails which linked the historic mining camps, including the notorious Black Bear Road. Visiting old ghost towns is popular, as is wilderness trekking and mountain climbing. Many of the old mining camps are now popular sites of summer homes. The San Juans are extremely steep; only Telluride has made the transition to a major ski resort. Purgatory (now known as Durango Mountain Resort) is a small ski area north of Durango near the Tamarron Resort. There is also skiing on Wolf Creek Pass at the Wolf Creek ski area. Recently Silverton Mountain ski area has begun operation near Silverton.

The Rio Grande rises on the east side of the range. The other side of the San Juans, the western slope of the continental divide, is drained by tributaries of the San Miguel, Dolores and Gunnison rivers, which all flow into the Colorado River. The San Juan and Uncompahgre National Forests cover a large portion of the San Juan Mountains. [WIKIPEDIA]

Bill Briggs
(the father of big mountain skiing in the U.S. and the first to ski the Grand Teton in 1971) 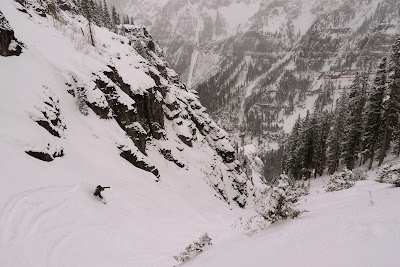 Brent Hutcheson, laying down some tracks in Tempter Chute 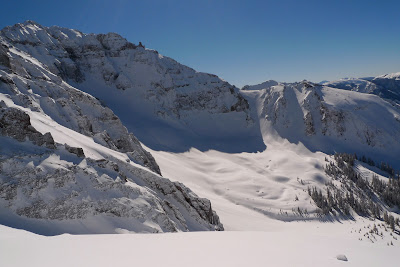 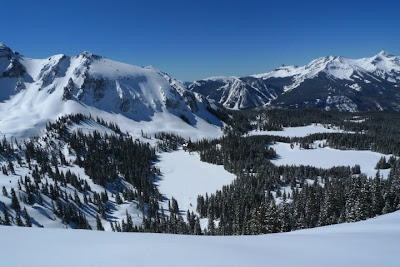 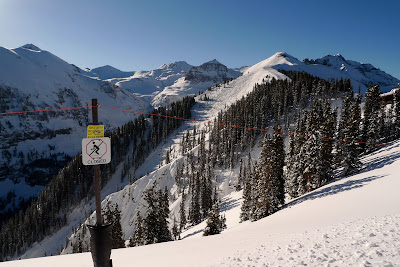 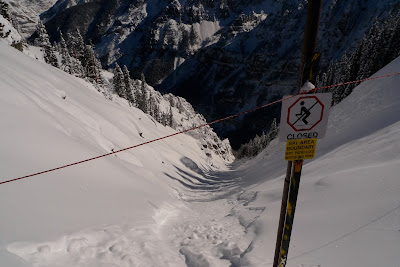 My tracks from previous day
(*NOTE: Please, if you attempt this line, do so only under the most solid conditions; as you can see, there is a tremendous amount of exposure.  Several people have died here.) 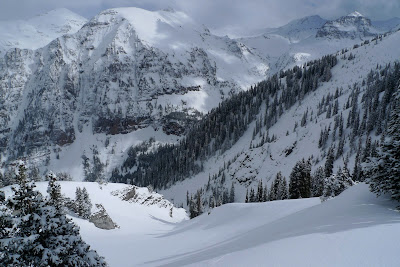 Unnamed (and untracked!) chute, Bear Creek.
(*NOTE: Shortly after taking this photo, I was swept over a small cliff by a shallow avalanche, completely unable to control either my snowboard or body position. Please consider the dangers of off-piste travel before committing to a line like this.) 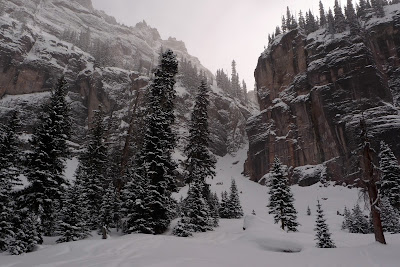 
Yesterday I climbed the San Joaquin peak/couloir and snowboarded down to Telluride through the Bear creek drainage.  It was an exhausting eight hour hike door to door, but with good weather and excellent snow conditions.  I decided to boot pack (climb vertically) the couloir from below for safety reasons using my snow shoes for a time and ice axe for anchoring and protection.  While the ascent/descent was very steep the climb did not require roping up, only good technique and a calm, deliberate demeanor.  After losing my footing about halfway through the couloir, I had to fight off a nauseating panic and regain my wits.  Because the couloir was so steep it was nearly as dangerous to stop and down climb as it was to continue upward.  I persevered, thankfully, and managed to hold it together by focusing on the task of putting one foot in front of the other.  I climbed all 1500 hundred feet or so for nearly three hours and was rewarded with a spectacular view of the Palmyra massif, Telluride ski resort, and the valley below.  After resting and rehydrating for a bit, it took all of ten minutes to ride and exit the bottom of the couloir. The San Joaquin is one of the most aesthetic and technical lines in the San Juan mountain range and is one of the most highly regarded among backcountry skiers here and in North America.  I am lucky to have had the skills and opportunity to achieve one of my biggest mountaineering goals.  Pictures below: 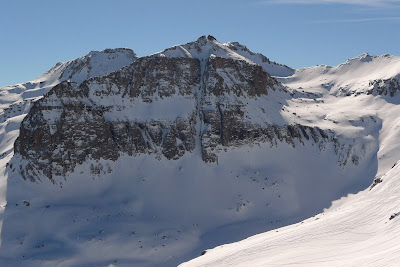 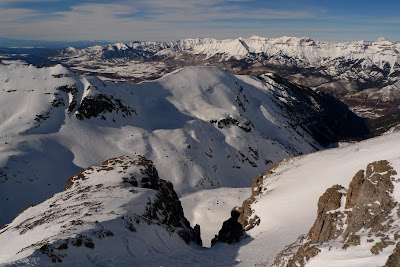 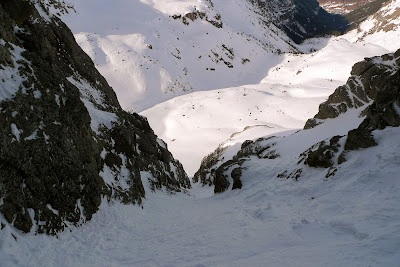 Another epic winter of snowboarding, hiking, and travel in the great Rocky Mountains has come to a close (almost!).  Jackson recorded 557 inches this season and it was still dumping when I left town on April 5th.  I began the winter in Telluride, vacationed in Jackson, and finally, after enduring one too many down days, relocated to the Hole for the last five or six weeks of the season.  In the short time I was in Jackson, it snowed there almost as much as it had all year in Telluride!  I managed to score 40 days of riding in Jackson and probably 25 more in snow-starved Telluride this year, most of that in the backcountry.  While I was unable to get to the Alps this season, I hit lots of new lines in both the Tetons and the San Juans, achieving most of my personal goals for the year.  I hiked almost every day, ice-climbed a frozen gorge in Ouray, spent two days on a backcountry tour below Mt. Sneffels with one night in a rustic cabin, almost killed myself riding then rappelling over a cliff on Cody peak, and explored both Mesa Verde national park, and the Grand Canyon.  Three near perfect days at Silverton Mountain and a multi-day ski mountaineering course in the Sawtooths of Idaho to cap it all off, and I'll be ready for the long warm days of summer.

I am presently on my way to Maui to try my hand at kitesurfing before heading to Idaho on April 28th, and then to the east coast for my nephew's college graduation!  This will be my last go around in New York as I plan to move Out West permanently after the summer.  I will spend the fall and spring in Jackson, a week or two in the San Juans, and a good part of the winter in Europe, travelling and riding in Chamonix, Courmayaeur, La Grave, Zermatt, and the Dolomites. This summer and fall I hope to make it to the Bavarian Alps, Utah, and Patagonia before ski season.  Next spring and summer I am focused on Peru, Tibet/Nepal, and possibly Thailand.  A summer ski trip to Portillo, Chile is also on the must do list but not sure if I'll be able to squeeze that in until next summer.  If anyone is interested in joining please let me know...would love to have a travel mate.  Work, in case you haven't yet figured it out, is overrated!

I've included several links to a recently completed project (my last big one for 2010/2011) in the Telluride backcountry if you are interested.  I do have photographs but since I will not have access to a computer for awhile, I will not be able to post them.  The project included hiking and riding down a 3,000ft couloir on the Little Wasatch Face in Bear Creek just a mile or two from my apartment.  While the skiing itself was not particularly frightening (good snow!), the tour required an exhausting 9.5 hours door to door, and was probably the single most inherently dangerous event of my life, as I was exposed to 5 or 6 hours of extreme avalanche danger, several 50 degree no-fall zones, and was forced to climb and ski some pretty perilous rock and ice without rope protection.  The route I completed was only first snowboarded unaided in 2008, and has probably never been boot-packed up to the top (first ascent?).  Needless to say it was exhilarating and only fuels my thirst for more adventure.  Check it out!

See you all soon! 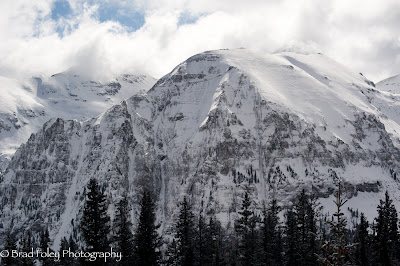 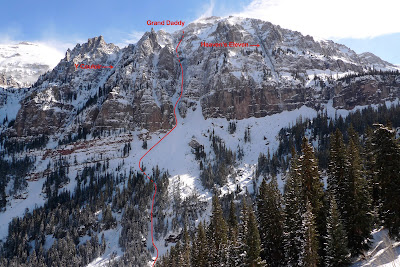 My route up (and down) Grandfather Couloir 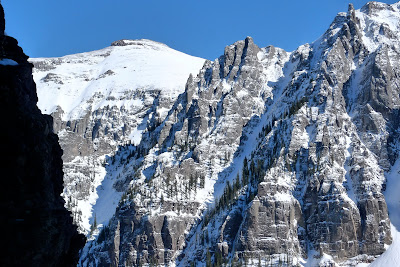 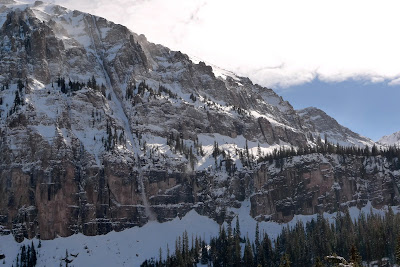 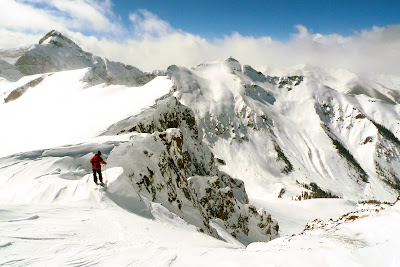 
Wild Snow: Josh Geetter's report on the Grandfather and more

My List of the 20 BEST ADVENTURE TOWNS in America

What I Consider the 20 BEST CITIES in the World (overall, quality of life)

My Votes For the 12 BEST SKI RESORTS in the World

The 10 BEST ADVENTURE FILMS of All Time

20 of The MOST IMPORTANT FILMS of Our Generation

A Selection of the MOST IMPORTANT Nonfiction Books of Our Generation